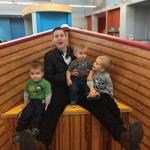 Who doesn't love fruit every now and then? Berries are fabulous as a dessert occasionally, but fresh organic fruit doesn't last long. So, it is hard keep fruit around for more than 24 hours. Seems like you have to eat it the day you buy it from Whole foods or the farmer's market. I am wondering about organic frozen fruit?

"Everybody is a genius. But if you judge a fish by its ability to climb a tree it will live its whole life believing that it is stupid."