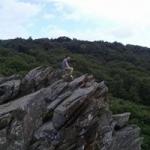 I've been incorporating blended fruit drinks into my daily routine. I usually use berries and occasionally banana if I feel like I want something sweet. I also use spinach to add more vegetable matter to my diet. What other vegetables should I add to my blended drinks that wouldnt make it taste too bad?

I also make avocado shakes but I've been wondering what I can blend with avocados that wouldn't be weird.