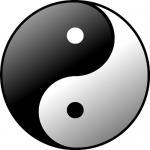 Does anyone have a logical explanation for this.